THE PATRON SAINTS Of ALTAR BOYS 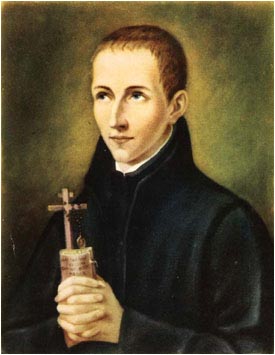 November 26               Saint John Berchmans is the Patron of Altar Boys and all boys and girls who want to love Jesus in the Blessed Sacrament and his Mother Mary. Even as a young boy John had great devotion to Holy Mass and the Rosary.
One day when he was only nine years old his mother became ill. Young as he was, he spent as many hours he could spare after school to came for his suffering mother.
He responded to God's call to work in his vineyard early life. He prepared for this in his own special way. For three years he was a pupil of a pastor of parish who prepared boy for his priesthood.
John has admitted in the Jesuit in Rome. He entered the seminary with a joyful anticipation of a life commitment in religious life. However, his health gave way to an illness. When he was about to die, he pressed to his heart his crucifix, his rosary and the book of rules. He said," The are my three treasures; with these I shall glady die." He died gazing lovingly on the Crucified Christ.
It was Pope Leo XIII who canonized him in 1888. 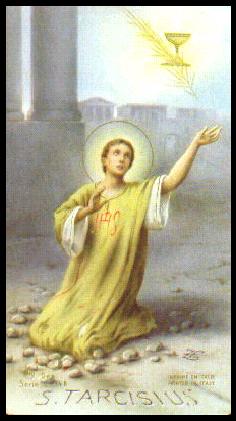 A twelve-year-old acolyte during one of the fierce Roman persecutions of the third century, probably during that of Valerian. Each day, from a secret meeting place in the catacombs where Christians gathered for Mass, a deacon would be sent to the prisons to carry the Eucharist to those Christians condemned to die. At one point, there was no deacon to send and so Saint Tarcisius, an acolyte, was sent carrying the "Holy Mysteries" to those in prison.
On the way, he was stopped by boys his own age who were not Christians but knew him as a playmate and lover of games. He was asked to join their games, but this time he refused and the crowd of boys noticed that he was carrying something. Somehow, he was also recognized as a Christian, and the small gang of boys, anxious to view the Christian "Mysteries," became a mob and turned upon Tarcisius with fury. He went down under the blows, and it is believed that a fellow Christian drove off the mob and rescued the young acolyte.
The mangled body of Tarcisius was carried back to the catacombs, but the boy died on the way from his injuries. He was buried in the cemetery of Saint Callistus, and his relics are claimed by the church of San Silvestro in Capite.
In the fourth century, Pope Saint Damasus wrote a poem about this "boy-martyr of the Eucharist" and says that, like another St. Stephen, he suffered a violent death at the hands of a mob rather than give up the Sacred Body to "raging dogs." His story became well known when Cardinal Wiseman made it a part of his novel Fabiola, in which the story of the young acolyte is dramatized and a very moving account given of his martyrdom and death.
Tarcisius, one of the patron saints of altar boys, has always been an example of youthful courage and devotion, and his story was one that was told again and again to urge others to a like heroism in suffering for their faith. In the Passion of Pope Stephen, written in the sixth century, Tarcisius is said to be an acolyte of the pope himself and, if so, this explains the great veneration in which he was held and the reason why he was chosen for so difficult a mission.

They are people whose common denominator was seeking the Kingdom of God. They have become models in Christian assembly dating back to the first century had some equivalent of a Knight of the Altar, the one who is charged with overseeing the sacristy and preparing for the Liturgy, unwavering faith and virtues of humility, patience and poverty.

A video of Saint Dominic de Guzman, an altar boy who become a joyful friar